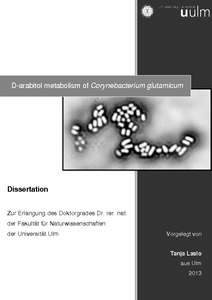 In the current work, the D-arabitol metabolism of Corynebacterium glutamicum was identified and characterized. It could be shown that the major route of D-arabitol transport into the C. glutamicum cell proceeds via the RbtT transporter (encoded by rbtT). Once entered the cell, D-arabitol is subsequently oxidized by a D-arabitol dehydrogenase (MtlD, encoded by mtlD) in a NAD+-dependent reaction to give D-xylulose. The next step of D-arabitol metabolism in C. glutamicum is the phosphorylation of D-xylulose to D-xylulose-5-phosphate, catalyzed by a xylulose kinase (XylB, encoded by xylB). Subsequently, D-xylulose-5-phosphate is channeled into the pentose phosphate pathway. Further investigations revealed AtlR (encoded by atlR) to act as the main transcriptional regulator of D-arabitol metabolism in Corynebacterium glutamicum by repressing the atlR-xylB and the rbtT-mtlD-sixA operon in the absence of D-arabitol. During growth of C. glutamicum wild type in presence of D-arabitol an increased expression of these two operons was observed as well as high specific enzyme activities of MtlD and XylB. A further aim of this work was to develop a system for in vivo and real-time transcriptional analysis. For this purpose, the luxAB genes, encoding the two luciferase subunits of Photorhabdus luminescens, were used as reporter genes. By co-expression of the luxAB genes together with the FMN reductase gene (fre) of Escherichia coli, higher luciferase activities and a more stable luciferase reaction were obtained. The integration of the reporter genes into the genome of C. glutamicum resulted in diminished effects on the growth behavior and on the expression patterns of the host strain. Using the promoter of the rbtT gene as a test promoter of this system, it could be shown that the established luciferase system represents a sensitive and rapid method for in vivo and real-time analysis of transcription in C. glutamicum.