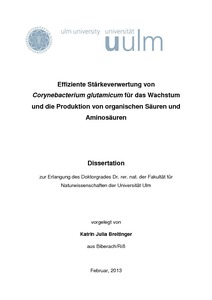 In this work, the acetate auxotrophic mutant C. glutamicum ELB-P, a pyruvate and succinate producing strain, was engineered to become an efficient producer of pyruvate and succinate from boiled soluble potato starch, by transformation with plasmid pAmy, carrying the gene of the alpha-amylase from Streptomyces griseus. In addition to soluble potato starch also potato, corn, rice and wheat starch were tested as substrate for C. glutamicum strains carrying pAmy. These starches were tested boiled as well as raw in CgC-minimal medium as carbon and energy source for the L-lysine producer C. glutamicum DM1729(pAmy). This strain was able to utilize all the starches with growth and L-lysine production. Both for production of pyruvate and succinate as well as for production of L-lysine with C. glutamicum ELB-P(pAmy) and C. glutamicum DM1729(pAmy), respectively, not utilized carbohydrates in the medium were detected by thin layer chromatography analyses in the medium at the end of the experiments. During in vitro analysis of different starch degrading enzymes, the combination of alpha-amylase and pullulanase from Klebsiella pneumoniae showed an almost complete degradation of the remaining carbohydrates to maltose. Furthermore, the substrate was consumed almost completely by C. glutamicum. Additionally, C. glutamicum strains were constructed able to release active pullulanase in the medium. The plasmid-driven expression of the pulA-gene from K. pneumoniae with upstream signal sequence for both the Sec and the Tat secretion system resulted in an active pullulanase in cell lysate and in the cell membrane of C. glutamicum DM1729. Adding alpha-amylase to the medium of these strains resulted in an almost complete degradation of the starch. The degradation products could be utilized efficiently by C. glutamicum DM1729 for growth and L-lysine production. The construction of a strain secreting both the alpha-amylase and the pullulanase to degrade starch more efficiently was also performed.