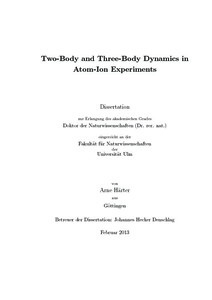 During the last few decades, the two fields of ultracold neutral atoms and of single trapped ions have undergone an amazing development. The incorporation of these systems into a single experiment exploits the complementary physical properties of the subsystems and opens up novel lines of research. I present experimental results obtained in one of the first hybrid atom-ion setups accessing the cold regime. Single ions interact with ultracold samples of 87Rb atoms. The collision energies are set by heating mechanisms in the Paul trap and are on the order of mK·kB. Interactions are generally strong and long-ranged. We observe elastic atom-ion scattering in the semi-classical energy regime in which the cross section depends on the collision energy and favors scattering at small angles. We were able to obtain a general good understanding of atom-ion two-body collisions. We observed sympathetic cooling of the ion over four orders of magnitude in energy through collisions with the ultracold atoms. Further, we utilized atom-ion scattering events to develop a novel method to compensate excess ion micromotion, the primary source of ion heating. Three-body collisions between two atoms and the ion play an important role. We identified these processes through the large amounts of energy that they release. This makes them detectable despite their suppression with respect to two-body collisions. We also showed that atom-ion three-body collisions become more prominent as the collision energy decreases. Finally, we employed our atom-ion apparatus to gain novel insights into three-body recombination between ultracold atoms. In these experiments the ion trap acts as an extremely sensitive ion detector. Through three-body recombination a Rb2 molecule is formed and can undergo ionization by absorbing photons from a strong laser. By scanning the frequency of the ionization laser we obtained a molecular spectrum and identified a relatively broad distribution over final molecular states.