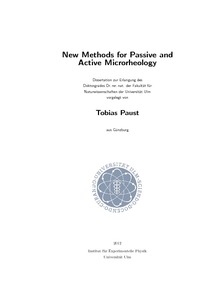 Pancreatic cells which migrate and spread in the pancreas are, in the case of malfunction, one of the most aggressive diseases. Although several properties are well described, some still are not completely understood or even revealed. Pancreatic cancer cells are known to be very soft due to a modified intermediate filament network in the cytoskeleton that enables them to pass through the surrounding tissue. Thus, in research on the elastic properties, a top-down approach is the extraction of the cells intermediate filament network and the bottom-up approach the controlled assembly of an independent network. For gaining new insights into the cell behavior, especially in sense of the mechanics and dynamics of its network, microrheology is the common method and a suitable tool to describe the network properties. Both the passive and the active method of microrheology uses embedded tracer particles to gather the elastic and viscous parts of the medium. This work concerns the introduction of two novel methods for passive and active microrheology. The goal of the first method is to improve the technique passive microrheology to determine the dynamic shear modulus and thus the elastic and diffusive properties of both the cell and the in vitro assembled networks. It is performed by a model-based fitting of the mean squared displacement and an exact Laplace transformation of the fit. This circumvents the introduced errors of other methods which use an approximation for the Laplace transformation. The second method is a completely new concept which deals with several embedded particles that are dependent on each other via the network. The calculation of the transfer tensor of the reference and several response particles allows to get insight into the dynamic behavior of the observed polymer network. Both methods include simulations which confirm the validity of the methods, and show the application of the developed tools to cells and in vitro assembled K8/K18 networks.