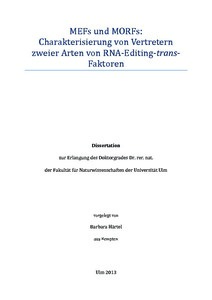 MEF and MORF proteins are two groups of RNA editing trans factors. In this thesis representatives of both groups were further charaterized. In two different approaches - via EMS mutant lines and via T-DNA insertion lines of so far uncharacterized PPR proteins - five new PPR proteins could be identified as required for RNA editing at one to six sites in mitochondria of Arabidopsis thaliana. MEF10 is needed for editing of a site in nad2, MEF12 of a site in nad5, MEF13 of six sites in transcripts of ccmFc, cox3, nad2, nad4, nad5 and nad7. MEF13 transgenically expressed in mef13-1 plants additionally increases editing at another site which is only weakly edited in wildtype plants. MEF28 is responsible for editing of one of two or both neighbouring sites in the nad2 transcript. MEF30 is required for editing of two sites in nad4 und cyt. In mutants of the two chloroplast targeted MORF proteins, MORF2 and MORF9, all chloroplast editing sites were examined. Both proteins are needed for editing of almost all plastidic sites. First, the intracellular localization of all nine MORF proteins was examined by fluorescence microscopy to further characterize both groups of RNA editing actors. In BiFC assays in tobacco epidermal cells interactions between MORF proteins as well as between MORF and PPR proteins were shown. Furthermore, editing mutants with defects in editing at two sites in the matR transcript were used to elucidate the potenial function of matR as a maturase.