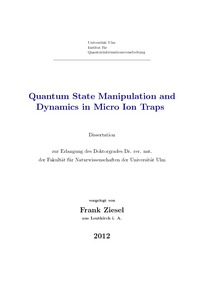 The outstanding degree of control over trapped ions in Paul traps gives rise to the development of novel quantum manipulation techniques. Optical transitions can be used for precise manipulation of internal and external states. This way, non-classical states can be created which are a key component of quantum algorithms based on quantum logic operations. This powerful optical toolbox enabled the trapped ion system to assume leadership in the field of quantum computation. This thesis addresses two major challenges in the field of micro ion trap quantum optics. The temperature dependence of the heating rate from the ion trap surface is analysed in a novel cryogenic micro ion trap. Furthermore segmented traps allow state manipulations by time dependent electrical potentials, generated by the control voltages. These electrical fields provide a fast and reliable control handle to the ions external degrees of freedom. Quantum computation in Paul trap arrays is based on a combination of ion crystal transport, splitting and merging operations, while laser driven quantum state manipulations are mainly carried out on small ion crystals. Within this thesis a basic building block was realised by performing transport operations with a single ground-state cooled ion. As a highlight of experimental achievements, shuttling in the non-adiabatic regime, on the timescale of the motional period was demonstrated with low residual energy transfer. For his endeavour a specialised low noise arbitrary function generator was designed and manufactured during this thesis. Arbitrary voltage ramps at a sampling rate of up to 2.5 MS/s on up to 12 channels allow the study of a novel excitation method by directly manipulating the ion using electrical forces. Accurate numerical simulations in combination with the fast high resolution voltage supply allow deterministic quantum manipulations via momentum kicks. I report the first experimental demonstration of displaced number states with trapped ions.