Metabolic engineering of the Colombian strain Clostridium sp. IBUN 158B in order to improve the bioconversion of glycerol into 1,3-propanediol 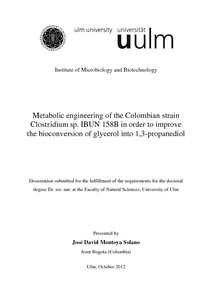 The non-pathogen strain Clostridium sp. IBUN 158B, isolated from a tomato field in Colombia and apparently belonging to a new species, is able to transform raw glycerol from a biodiesel production process into 1,3-propanediol (1,3-PD), a substrate for textile polymers. In this work, the strain Clostridium sp. IBUN 158B was modified by genetic engineering in order to reach an industrially efficient 1,3-PD production level. The genes encoding the enzymes hydrogenase (hydA), 3-hydroxybutyryl-CoA-dehydrogenase (hbd), and lactate dehydrogenase (ldhA) were inactivated in single inactivation mutants with the aid of the ClosTron mutagenesis system. In this way, more NADH generated during the oxidative metabolism should be available for 1,3-PD production. Additionally, the genes dhaB1, dhaB2, and dhaT, constituting the glycerol reductive pathway and clustered together in the related strain Clostridium sp. IBUN 13A, were overexpressed in Clostridium sp. IBUN 158B WT as well as in the inactivation mutants hydA-420s::Ll.LtrB and ldhA-508s::Ll.LtrB using the vector pMTL007C-E2, with the aim of funneling more glycerol to 1,3-PD production. The performance of each resulting strain was evaluated in batch cultures during 72-120 h using a complex medium with 217 mM glycerol as substrate. The plasmidless inactivation mutants hydA-420s::Ll.LtrB and hbd-414s::Ll.LtrB reached lower cell concentrations and 1,3-PD titers than Clostridium sp. IBUN 158B WT, while all strains containing the overexpression plasmid produced significantly more 1,3-PD than the WT strain. The best 1,3-PD producers were the WT strain carrying the overexpression plasmid and the plasmidless ldhA mutant, both reaching significantly higher cell concentrations and approx. 3-fold higher 1,3-PD titers (56-58 mM) than the plasmidless WT strain. Fermentations in reactors under controlled conditions should be carried out with these strains in order to ascertain their maximal 1,3-PD production potential.