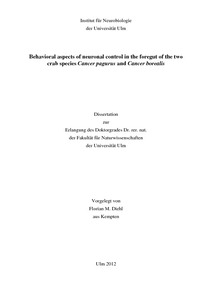 Neuronal networks compute cues from the environment using specialized sensors and they actuate the musculature, eliciting directed behavioral output. Investigating rhythmic movement patterns in invertebrates has been a successful method in neuroscience to understand the principles of neuronal control. A successful model system for the past decades has been the stomatogastric nervous system of decapod crustaceans. Rhythmic behavior in the foregut is controlled by a network of neurons constituting central pattern generators. The initiation, modulation and termination of activity in these central pattern generators are performed by paracrine inputs from projection neurons and endocrine inputs from hormones in the blood stream. How this modulation is controlled and whether the large flexibility caused by these influences is relevant for behavioral output and ultimately the survival of the organism, is still subject to debate. The experiments in this work were conducted on in vivo preparations of two brachyuran species (Cancer pagurus & Cancer borealis). They demonstrate that modulatory and sensory pathways, which were previously established in in vitro studies, were sufficient to elicit rhythmic activity of motor neurons in vivo as well. While several aspects of the motor patterns could be traced from the neuronal activity to muscle force production and finally tooth movement, several movement properties were not predicted by the neuronal activity alone. The concerted interaction of motor neurons, muscles and ossicle dynamics in vivo thus has to be appreciated to study these emergent properties. While the stomatogastric nervous system has been a model for investigating motor pattern generation for several decades, linking the combination of the comprehensive knowledge about the neuronal network with behavioral and ethological experiments, could reveal new insights into what methods organisms evolved to respond adequately to changing environmental cues.