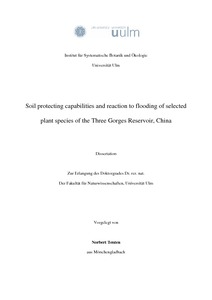 The flooding resistance, plant reaction to changes in flooding and waterlogging periods as well as the plant species ability to stabilize the riverside with differently thick new sediment layers has been investigated by analyzing growth parameters, soil cover, the mitigation of soil runoff, oxygen, root exudates and carbohydrate contents. The different plant growth forms (i.e. tussocks vs. creeping) as well as the root length after the growing period of 12 weeks showed an effect on the soil runoff. All species were able to provide soil protection as found in populations at the riverside after 12 weeks of growth. The soil runoff could be reduced by more than 63 % compared to bare soils. When covered with 5, 10 and 18 cm new sediments H. compressa had the highest recovery rates and could produce 24 times of the initial root length and 41 times it`s original leaf. C. dactylon showed the best soil retention compared to the other species examined, since it could reduce the soil runoff up to 87 %. C. dactylon was found to be significantly better for soil-protection with new sediments than A. anomala and H. compressa at the conditions at the Three Gorges Reservoir. Under flooding conditions A. anomala and H. compressa continued to grow slowly up to 9 weeks after flooding. After 12 weeks growing under waterlogged conditions A. anomala produced 3.5 times and H. compressa 4.5 times the root length compared to the control plants. Furthermore the waterlogged plants had significantly more fine roots than the control plants. When the experiment was repeated in summer, H. compressa showed no significant differences in the root length in both treatments. In addition the waterlogged roots of H. compressa had significantly more fine roots. Furthermore both species produced aerenchyma autonomously and were able to oxidize the soil in their rhizosphere.