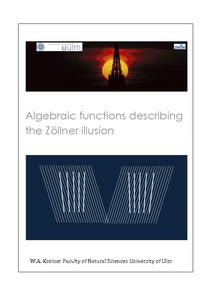 From a variant of the Zöllner illusion, the perceived tilt of a horizontal and a vertical line was measured under the influence of a background field of parallel lines, rotated in steps from 4 degrees to 45 degrees. It was found that the intensity of the illusion is stronger on a horizontal line than on a vertical one (3.3 deg and 2.6 deg, respectively). A square and a rhombus were investigated as well. The result that the apparent tilt of a line exhibits a maximum when the field is rotated by about 17 deg is in close agreement with the value reported in the literature for the so called after effect. From conceptual models algebraic expressions are derived which give the intensity of the illusion y as a function of the angle of rotation x of the context field. The functions y(x) = A·x·exp(-B·x) as well as y(x) = A1·exp(-B1·(log(x/C1))²) were found to reproduce the experimental values within their error limits for rotational angles between 0 deg and 45 deg. The functions y(x) = D+A·x·exp(-B·x²) and y(x) = D+A·sin(4x) ·exp(-B·sin(2x)) are fitted to experimental results obtained by other authors.