Ingoing versus outgoing wings. The Müller-Lyer and the mirrored triangle illusion 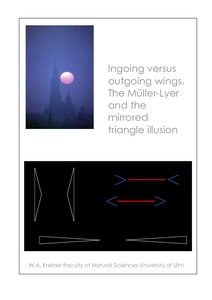 Two variants of the Müller-Lyer illusion with ingoing and outgoing wings, respectively, are investigated. The distance between the wings was varied in steps from shorter than the length of the shaft until about three times its length. Plotting the apparent length of the shaft as a function of the framing ratio shows that the curve exhibits either a smooth or a sharp maximum, depending on whether the tips of the arrows are pointing outwards or inwards, respectively. Algebraic functions are fitted to each of the curves. In another experiment the perceived separation between the tips of two mirrored triangles is investigated. It was found that the apparent distance between the tips is a function of the triangles´ shape. The illusion is interpreted as due to a variation of the conspicuity range (attentional angle), its size depending on the horizontal and vertical extension of the stimulus. An analytical expression is fitted to the experimental values. From the parameters obtained it is concluded that the horizontal dimension of the conspicuity range is mainly influenced by the horizontal extension of the stimulus rather than by its vertical dimension.