Variants of the Baldwin illusion 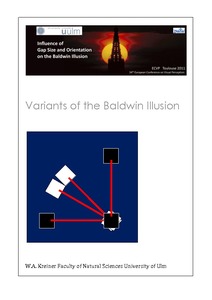 The perceived length of a line has been investigated on two variants of the Baldwin illusion. Other than in the classic illusion, the size of the context elements was kept constant. They were positioned symmetrically along the axis of the shaft, either within the length of the target line, right at the ends or at a certain distance from the line, leaving a gap which was varied in size. In the first experiment, employing squares as context elements, the stimulus was presented in four different orientations (horizontally, vertically, or at 30 or 45 degrees with respect to the horizontal). It was found that: (1) The perceived length L(perc)/L0 of the line as a function of the framing ratio exhibits a sharp peak when the squares are attached to the line without a gap. (2) The perceived length decreases exponentially on both sides of the maximum. (3) For vertical orientation and at an angle of 45 degrees, the perceived lengths nearly coincide, but (4) significant differences are observed between horizontal orientation and an inclination of 30 and 45 degrees, respectively. The so called dumbbell variant of the Baldwin illusion was investigated for horizontal orientation of the stimulus only. The results are discussed with respect to the assimilation/averaging theory. From a conceptual model the algebraic function L(perc)/L0=D+C*x+A*exp(-B*(abs((3*x-5)/2))) is derived and fitted to the experimental values.