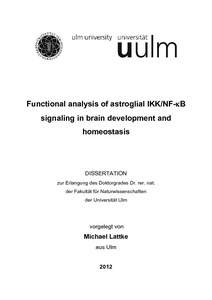 Neuroinflammation is an essential defense response to pathogens or injury in the central nervous system, but might also contribute to the pathogenesis of neurological disorders. Astrocytes are glial cells that are implicated in neuroinflammation, but also in brain development and homeostasis. The NF-kappa B transcription factors are key regulators of inflammation that also regulate in cell proliferation, differentiation and survival. Previous studies suggested that NF-kappa B activation in astrocytes might indeed be critical for neuroinflammatory responses and its pathological consequences. In the present study a novel mouse model was characterized to further elucidate the role of astroglial NF-Kappa B signaling in neuroinflammation. This model conditionally expresses a constitutively active mutant of the NF-kappa B activating kinase IKK2 in astrocytes. This results in astroglial NF-kappa B activation, which is sufficient to induce a prominent neuroinflammatory response and impairs brain development and homeostasis. When astroglial NF-kappa B was activated during brain development, this resulted in hydrocephalus formation due to impaired ependymal ciliogenesis. Activation of astroglial NF-kappa B in the mature brain resulted in cerebellar ataxia due to excitotoxic Purkinje cell degeneration caused by a disrupted support function of the astrocyte-related Bergmann glia. In conclusion, the present study strengthens the view that astrocytes along with microglia are key players of the innate immunity of the central nervous system. The study also provides the first causal link between NF-kappa B signaling and hydrocephalus formation and indicates that NF-kappa B mediated astrogliotic activation of Bergmann glia might cause degeneration of Purkinje cells in autoimmune/inflammatory cerebellar ataxias. As future perspective, the described mouse model might serve as useful tool to study hydrocephalus formation, autoimmune/inflammatory ataxias, and the role of inflammatory processes in other neurological diseases.