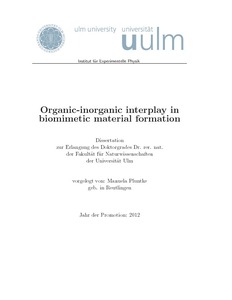 The thesis clarifies significant aspects of the interplay between organic and inorganic compounds and uses this knowledge to create composite materials following Nature"s example. Three different approaches for modeling the interface between an organic phase and CaCO3 were developed. The specific goal is to find suitable simple artificial organic systems that control nucleation and growth of inorganic crystals. The effects of designed changes in the structural properties of two type of molecular platforms were investigated first. Amphiphilic molecules with nylon [m,n] oligomers delivered matrices with a specific self-organizing ordering of the functional groups at the water surface. However, different ordering has no influence on the CaCO3 crystal growth. Alternatively, hairpin peptides with four different combinations of alternating hydrophilic and hydrophobic amino-acids were proposed. In a second step, it was shown that PAA additives stabilize a polymer-induced liquid precursor phase, which later accumulates in amorphous nano-particles underneath an organic (PS-b-PAA) Langmuir monolayer. Further addition of energy led to a solid-solid transformation of the amorphous particles into a polycrystalline calcite film. Stacking of individual monolayers is shown to produce a material highly similar to that of nature-designed nacre. Finally, polymer brush stripes were produced in order to achieve systematic control of the shape of crystalline films and the adsorption of human stem cells to the patterns was investigated. Cells adhere predominantly to the low-height polymer regions, which can be traced back to unfavorable low values of the elastic modulus of the patterned polymer brushes, determined by matching AFM measurements to extensions of the classical Hertz indentation model. However, the viability of the cells is not affected by the polymers, making the brushes perfect candidates for 3-dimensional matrices in composite-coatings for human bone implants.