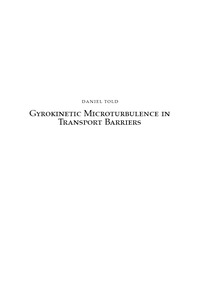 Modern fusion research aims at making the energy source of the sun accessible for electricity generation on earth. For this purpose, magnetically confined plasmas must be heated to very high temperatures of 100 million Kelvin. The resulting steep pressure gradients lead to turbulent mixing in the plasma, causing a drastic deterioration of particle and energy confinement. Under certain conditions, however, self-organized transport barriers can form in the plasma, which allow extremely steep density and temperature gradients, and strongly improved confinement. Understanding the physical mechanisms of transport barriers is thus a key step toward increasing the feasibility and competitiveness of fusion power plants. This work aims to advance the theoretical understanding of transport barriers occurring both in the core and the edge of the plasma. In order to study such conditions, the effect of strongly varying temperature and density profiles must be considered, as well as the complex shaping of today"s tokamak plasmas. The gyrokinetic turbulence code GENE has in recent years been extended to include such capabilities, and is in this work for the first time applied to the conditions of both core and edge transport barriers. Discharges of both the Swiss tokamak TCV and the German tokamak ASDEX Upgrade exhibiting transport barriers were examined, using both the local and global versions of the GENE code. For core barriers, it is found that small-scale electron temperature gradient driven (ETG) turbulence can play an important role in determining the steepness of the barrier. The use of a global model in these studies turns out to be crucial, as the transport due to large-scale turbulence is otherwise overestimated by orders of magnitude. For edge transport barriers, ETG instabilities are found to drive a significant fraction of the experimental heat transport, making them a key candidate for the residual turbulence in the edge barrier of high-confinement discharges.