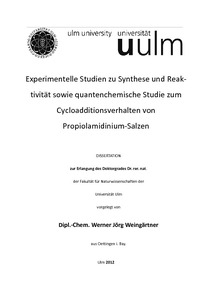 Propiolamidinium salts combine in one organic cation two reactive functional groups and represent a class of electron-poor alkynes with a wide variety of synthetic applications. Propiolamidinium salts undergo conjugate additions reactions with nucleophiles and can be used as electron-deficient reaction partner in cycloadditions which features a major strategy for convergent synthesis of carbo- and heterocyclic frameworks. Of particular interest are the 1,3-dipolar cycloaddition reactions with nitrones and organo azides, yields to 2,3-dihydroisoxazoles and 1,2,3-triazoles. The acetylenic amidinium salts were mainly synthesized in two-step strategy. Starting from hexaalkylguanidinium chlorides a series of orthoamides of alkynecarboxylic acids were prepared. Orthoamides were then converted into novel propiolamidinium salts by PhCOCl or TESOTf induced cleavage. Michael-type additions to propiolamidinium salts were carried out by reactions with different nucleophiles. Otherwise, treatment of terminal amidinium alkyne with basic silver salts resulted in an interesting bis(alknyl)silver complex, [Ag(CCC(NMe2)2]AgCl2. The key issue to be investigated was the suitability for use as reaction partner in cycloadditions and to explain the high regioselectivity observed. Hitherto unknown, successful cycloaddition reactions were reported, but surprisingly acetylenic amidinium salts turned out to be reluctant to undergo cycloaddition reactions. The carboxamidinium group present in the cycloaddition products offered several possibilities for functional group transformation. Diversified computational chemistry methods were finally made use of to get a deeper insight into reactivity behavior of propiolamidinium salt. The performance of DFT-methods was benchmarked with experimental data.