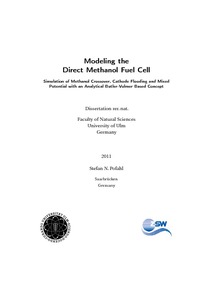 The Direct Methanol Fuel Cell (DMFC) is simulated in sequential mode in a zero-dimensional model using Butler-Volmer equations to represent the electro-chemical reactions on both electrodes. It is shown that this approach is able to predict the harmful methanol flow across the polymer electrolyte membrane (PEM) - the so called crossover - and the resulting loss of potential on the cathode, caused by the mixed potential that is built between the parasitic cathodic methanol oxidation and the oxygen reduction. A linear model is presented, which explains the deviation between the real anode polarization and the Butler-Volmer equation with the difference in activity of methanol in liquid and vapor phase. The comprehensive model is validated qualitatively and quantitatively with data from literature as well as with measured data.