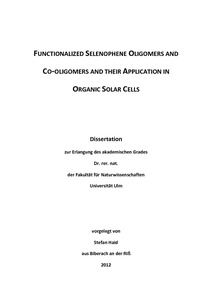 Functionalized selenophene oligomers and co-oligomers were synthesized, their optoelectronic properties were investigated and they were implemented as donor materials in different types of organic solar cells. In a series of dicyanovinyl (DCV)-substituted selenophene-thiophene pentamers increasing selenophene content resulted in higher melting points, red-shifted absorption spectra, lower band gaps, and higher molar extinction coefficients but decreasing efficiencies in bulk-heterojunction solar cells, probably due to a lower degree of phase separation in the blend layer. A series of non-alkylated terminally DCV-substituted oligoselenophenes exhibited red-shifted absorption bands and lower band gaps compared to their thiophene analogs. A crystal structure analysis of quaterselenophene 6 corroborated the important role of the DCV groups for molecular ordering. Oligoselenophenes 6 and 7 were implemented as donor materials in vacuum-processed planar heterojunction solar cells and their efficiencies exceeded those of their thiophene analogs, the best efficiency being 3.4 % for 7. In order to obtain donor materials with even more red-shifted absorption spectra, a series of dithienopyrrole and diselenophenopyrrole-based compounds (9-14) was synthesized. Those co-oligomers showed very broad absorption spectra in thin films with maxima around 700 nm. The absorption range could be tuned by the selenophene content. Co-oligomers 9-14 were implemented as donor materials in vacuum-processed BHJ solar cells, but the results could not disclosed in this thesis. Furthermore, a series of low band gap donor-pi-acceptor sensitizers for dye-sensitized solar cells with different pi-bridges and a benzothiadiazole (BTDA) unit adjacent to the anchoring group was synthesized. The devices attained only poor PCEs of 1.3 - 1.8 %. A fourth sensitizer 19 with an additional phenyl unit between the BTDA moiety and the anchoring group showed a more than six times higher PCE (8.21 %) than dye 17 (1.24 %).