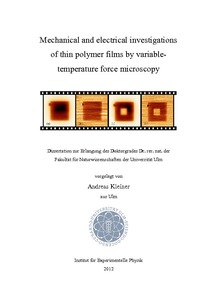 Atomic Force Microscopy (AFM) provides the possibility to probe mechanical, electrical and magnetical properties on nanometer scale. Different methods have been invented, including force-distance curve measurements that are used for mechanical investigations in this study. The indentation behavior of a hard tip can be observed and characteristic quantities like stiffness or the energy of hysteresis can be analyzed. Combining the AFM with a heating device for sample temperatures between 300 K and 400 K enables to investigate variations in the mechanical properties of thin films at elevated temperatures and in the glass transition range. Different static and dynamic modes like force curve measurements, Pulsed Force Mode or intermittent contact techniques apply certain amounts of normal and lateral forces to the sample. In most cases this creates surface charges, similar to the macroscopic contact electrification of insulators. These charges can be imaged by Kelvin Probe or Electric Force Microscopy (KPFM / EFM). The quantity of charge depends on parameters like contact time, applied force or scanning velocity. By adjusting the tip voltage during contact, the amount and polarity can be controlled and charges can be erased and overwritten without change in the polymer structure. High voltages between tip and sample and an appropriate tip-sample distance and scanning velocity lead to raised topographic features due to the large non-uniform electric field. The height of these structures reaches several nanometers, depending on tip shape and applied voltage, and is reversible. This effect offers a fast and easy way to AFM-based lithography. Long-term measurements of these surface charges on different polymers at various temperatures will lead to a better understanding of charge storage and transport mechanisms on thin films. In addition, some applications such as high density data storage or creation of templates for molecule deposition on surfaces will be described.