The Listeria monocytogenes agr system: autoregulation and role in virulence 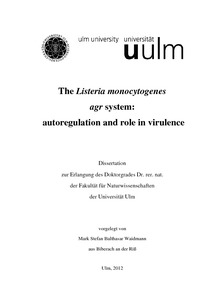 Peptide-based regulatory mechanisms of Gram-positive bacteria were shown to radar environmental cues as well as coordinate expression of virulence genes. Recently, a locus consisting of four genes (agrBDCA) was identified in the genome of L. monocytogenes EGDe showing homology to the agr system of S. aureus. In this doctoral thesis, promoter-lux-fusions revealed that activation of PII, the promoter preceding the agr operon, is strictly dependent on a functional agrD gene suggesting an autoregulatory circuit for agr activation as proposed for S. aureus. RT-PCR experiments did not provide evidence for a regulatory RNAIII in L. monocytogenes. This in turn indicates that, unlike in S. aureus, AgrA is the major effector molecule in agr-dependent regulation in L. monocytogenes. Microarray analysis and promoter-lux reporter assays performed in a previous study suggest an impaired expression of virulence genes in L. monocytogenes EGDe increment agrD. In this study, assays specific for the activity of the major virulence factors of L. monocytogenes revealed an impaired InlA- and InlB-dependent invasion, hemolytic and lecithinase activities, an altered intracellular distribution and disturbed actin recruitment by this strain. Taken together, the results of this study indicate that the agr system is involved in mediating the transition from the saprophytic to the virulent lifestyle and may be required for fine-tuning of virulence gene expression.