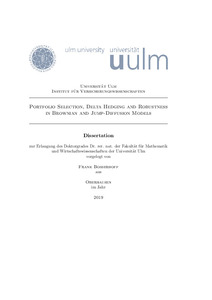 This thesis covers miscellaneous topics in financial and insurance mathematics. The first two chapters deal with generalizations of mean-variance portfolio selection and the fnal one with Delta hedging and robustness issues. In Chapter 2, we consider a time-consistent mean-variance portfolio selection problem of an insurer and allow for the incorporation of basis (mortality) risk. The optimal solution is identified with a Nash subgame perfect equilibrium. We characterize an optimal strategy as solution of a system of partial integro-differential equations (PIDEs), a so called extended Hamilton-Jacobi-Bellman (HJB) system. We prove that the equilibrium is necessarily a solution of the extended HJB system. Under certain conditions we obtain an explicit solution to the extended HJB system and provide the optimal trading strategies in closed-form. A simulation shows that the previously found strategies yield payoffs whose expectations and variances are robust regarding the distribution of jump sizes of the stock. The same phenomenon is observed when the variance is correctly estimated, but erroneously ascribed to the diffusion components solely. Further, we show that differences in the insurance horizon and the time to maturity of a longevity asset do not add to the variance of the terminal wealth. In Chapter 3, we first note that investors are particularly concerned about downside risk, which is not properly reected by classical mean-variance portfolio selection due to the symmetry of the second central moment. We therefore consider the following extension: according to Ito's representation theorem the final value of a portfolio can be written as the sum of its expected value plus some stochastic integral w.r.t. the Brownian motion. The integrand of the latter integral reflects the local volatility of the portfolio's terminal payoff. Hence, we consider the optimization problem of obtaining a high expected payout while keeping control of the risk measured in terms of the accumulated local volatility for possibly asymmetric penalty functions. As this optimization problem is time-inconsistent, Bellman's dynamic programming principle is not applicable. We approach this time-inconsistent stochastic optimal control problem in continuous time by solving its discrete time analogue first. Thereby the discrete time optimal policies are represented in closed-form for arbitrary many trading time points per unit time. Subsequently, we employ a convergence argument to describe the continuous time optimal investment policy. In Chapter 4, we consider an investor aiming at Delta hedging a European contingent claim h(S(T)) in a jump-diffusion model, but incorrectly specifying the stock price's volatility and jump sensitivity, so that any hedging strategy is calculated under a misspecified model. When does the erroneously computed strategy super-replicate the true claim in an appropriate sense? If the misspecified volatility and jump sensitivity dominate the true ones, we show that following the misspecified Delta strategy does super-replicate h(S(T)) in expectation among a wide collection of models. We also show that if a robust pricing operator with a whole class of models is used, the corresponding hedge is dominating the contingent claim under each model in expectation. Our results rely on proving stochastic flow properties of the jump-diffusion and the convexity of the value function. In the pure Poisson case, we establish that an overestimation of the jump sensitivity results in an almost sure one-sided hedge. Moreover, in general the misspecifed price of the option dominates the true one if the volatility and the jump sensitivity are overestimated.