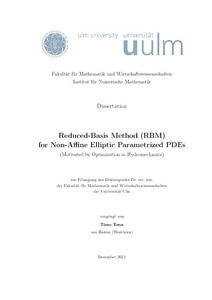 This work has been motivated by optimizing the efficiency of a ship-propulsion device, the Voith-Schneider Propeller, w.r.t. its steering (determined by the so-called blade-steering curve). We consider a simplified model (stationary convection-diffusion problem), which is transformed to a reference domain in a first step. This transformation shifts the parametric dependency into the coefficients of the PDE, which is key for the application of the reduced-basis method (RBM), and results in a non-affine linear elliptic parametrized PDE (PPDE). Optimal control problems are investigated for this class of PPDEs, where a) the cost functional involves surface integrals, and b) the presence of obstacles inside the domain is assumed, which usually prohibits optimal regularity. For accelerating the computation of a numerical solution, the reduced cost functional and its gradient are replaced by reduced-order approximations, which are obtained by means of the RBM. We provide some general framework for the RBM for non-affine linear elliptic PPDEs. We recover efficiency by a) deriving a suitable a-posteriori error estimator for the field, b) extending the standard greedy sampling procedure, such that the approximation tolerances for the non-affine forms are automatically adapted to the (current) approximation properties of the RB space, and c) taking care that the utilized affine approximations are as economic as possible. The latter by extending the empirical interpolation method (EIM) to matrix-valued coefficients. We extend and compare two different approaches for evaluating quadratic outputs (such as the reduced cost functional). In the end, we investigate the RBM for non-affine quadratic non-linear PPDEs, which is as a first step towards considering optimal control problems with a more realistic model of flow as underlying PDE. All investigations are underlined by numerical experiments.