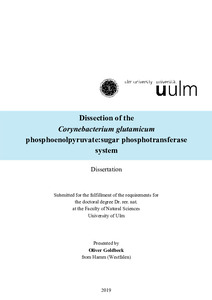 The quest for sugars as source of energy and cellular building blocks starts with efficient uptake systems. The focus of this work was laid on the widespread bacterial phosphoenolpyruvate:sugar phosphotransferase system (PTS), a complex group-translocation system for carbohydrates in bacteria. The model organism Corynebacterium glutamicum possesses three active PTS sugar permeases (EII-complexes) that are responsible for the uptake and concomitant phosphorylation of several substrates of which glucose, fructose and sucrose are the most important. The outstanding property of C. glutamicum to co-metabolise carbohydrates is not understood hitherto. Only few cases of consecutive substrate utilization are known of which one was part of this work: The sialic acid derivate N-acetylneuraminic acid (Neu5Ac), a predominantly eukaryotic metabolite, is consumed after glucose or fructose in cultivations of C. glutamicum. However, while carbohydrate regulation in other bacteria often involves the host PTS, C. glutamicums’ PTS remains curiously silent. The observation of regulatory effects on PTS-mediated sugar uptake exerted by the accumulation of glucose 6-phosphate (G6P) in phosphoglucoisomerase (Pgi)-deficient strains was a starting point to understand the connections of the PTS with central metabolism in C. glutamicum. Accumulation of metabolites led to severe growth defects on glucose, reduced expression of the glucose-specific PTS-permease encoding gene ptsG, and a drastic decrease of transport activity. In order to identify specific targets in the regulation between the PTS permeases, pgi-deficient suppressor mutants were analysed. Mutations in the uncharacterized gene designated lpdA, encoding a putative flavoprotein-disulfid-reductase, were detected. LpdA and the suppressor variant LpdAA223T were purified and characterized biochemically. The enzymes exhibited activity with both NADH and NADPH whereas NADPH is the natural cosubstrate of LpdA. The amino acid exchange in LpdAA223T led to higher overall activity of the enzyme with NADPH. The exact function of LpdA in C. glutamicum remains unclear. The increased LpdA-activity in the suppressor mutants seemed to relieve NADPH-feedback inhibition and improved growth of the strains. The development of the NADPH specific biosensor mBFP made it possible to compare NADPH-related fluorescence levels of the mutants and revealed that NADPH in these strains is re-balanced to the wildtype-level. mBFP is a benzaldehyde-reductase and specifically binds NADPH. The blue fluorescence of NADPH is amplified by mBFP, which allows easy, noninvasive in vivo read-outs. For the investigation of direct interactions of the EII-complexes the repertoire of genetic tools for C. glutamicum was expanded with the construction of the pOGOduet vector. The plasmid enables expression of genes under the control of the IPTG inducible Ptac promoter and the anhydrotetracycline inducible Ptet promoter. Functionality of the vector was verified by co-expression of fluorophore encoding genes with variable inductor concentrations. pOGOduet was used to co-express C. glutamicum PTS genes. Overproduction of the general PTS components EI and HPr led to an increase in growth rate while no or little effect on growth rate was observed for the overexpression of the permeases PtsG and PtsS. The localization of EII-complexes and general PTS proteins brought more insights into the organization of the proteins. Fluorescent translational fusions of all C. glutamicum PTS proteins were generated. Thereby, mVenus labelled HPr and eCFP labelled EI were used to compare their localization to the membrane spanning EII-complexes PtsG and PtsF. The glucose specific PtsG and the fructose specific permease PtsF are forming membrane embedded cluster that are not static, but dynamically adapt their membrane occupancy whenever substrate is available. The general PTS components EI and HPr are dispersed in the cytoplasm at all times and consecutively synthesized under all tested conditions. Accompanied with these observations, it was shown in this work that the protein level organization of EII-complexes cannot be deduced from their genetic information only. The fused EIIBCA subunits of PtsG were analysed via Western Blot, fluorescence microscopy and differential ultracentrifugation and found in at least three forms: a fused, full-length EIIBCA-, a membrane associated EIIBC- and a soluble EIIA-portion. The EIIAGlc subunit was present in a cytosolic form that can fulfil its primary function as phosphotransferase towards EIIBGlc, but also to EIIBSuc. The separation site between EIIBC and EIIA was located within the flexible linker region between these domains. The interaction of EIIAGlc with EIIBSuc, implicates direct interactions of the two distinct sugar permeases PtsG and PtsS. Analysis of pulldown assays with affinity-tagged PtsG furthermore revealed the global transcriptional regulator GlxR and another uncharacterized DeoR-type regulator as promising candidates for interactions with EIIAGlc. The transcriptional regulation of PTS-genes is one of the major characteristics of SugR, making it crucial for a balanced metabolite homeostasis during growth on different substrates. In this work, SugR-mediated repression of ptsS in ptsF-deficient C. glutamicum strains during growth on sucrose was directly linked to fructose 1- phosphate as a central effector molecule of carbohydrate regulation. Heterologous sugar-phosphate specific fructokinases from Homo sapiens and Clostridium acetobutylicum were characterized biochemically and successfully produced in C. glutamicum. Presence of fructose 1-phosphate led to the restoration of wildtype-like PtsS levels.