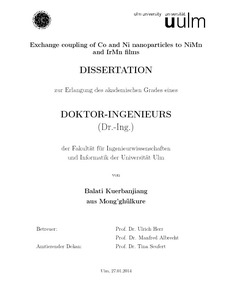 Ferromagnetic (FM) nanoparticles are a main constituent of the magnetic storage layer of hard disks. Further increase of the storage density by decreasing the size of the nanoparticles is hindered by the onset of superparamagnetism. A promising way to overcome this obstacle is the stabilization of the magnetic state of the nanoparticles by exchange coupling to an antiferromagnetic (AF) environment. The present study concentrates on the influence of exchange coupling between FM nanoparticles and AF NiMn or IrMn films. Co and Ni nanoparticles with mean sizes in the range of 8 nm to 20 nm were prepared by inert gas condensation and subsequently deposited on top of or embedded into the sputtered AF films. The inert gas condensation technique allows variation of the number density of the nanoparticles per unit area independently from their size. It is found that the room temperature coercivity of 20 nm Co particles on top of AF NiMn films increases after a field annealing treatment irrespective of the areal density. In the second part of the study, 9 nm diameter Co particles have been embedded in NiMn or IrMn by sequential deposition of particles and films. Embedding into IrMn leads to a small but detectable exchange bias field varying between 30 and 55 Oe at room temperature depending on the areal density of the nanoparticles. However, field cooling to 10 K results in a much larger exchange bias fields of up to 518 Oe. Magnetic measurements above room temperature show a stable behavior of the magnetization up to 150 °C. Exchange bias is observed at room temperature for Ni nanoparticles in the size range of 8 to 15 nm which have been embedded into IrMn films. Exchange bias of particle size dependence, field cooling dependence, and volumetric filling factor dependence have been studied in detail. The results are discussed with respect to the properties of the different FM and AF materials used.