The generality of the attentional sensitization model of unconscious cognition 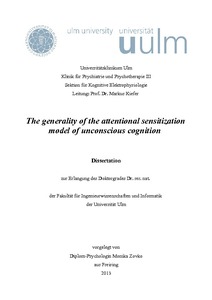 According to classical theories of automaticity and attention (Posner & Snyder, 1975; Schneider & Shiffrin, 1977), unconscious automatic processes are insusceptible to higher level attentional influences such as intentions or task sets. Recent evidence, however, shows that the cognitive system has to be configured in a certain way for automatic processes to occur (e.g., Kiefer & Martens, 2010). The attentional sensitization model of unconscious cognition (Kiefer & Martens, 2010) suggests that automatic processes require an attentional enhancement in task-relevant pathways by prefrontal top-down signals: Automatic processes can only be initiated if the process-relevant stimulus dimension matches the active attentional set. To induce an attentional set (task set), the masked priming task is preceded by a decision task which can pertain to various cognitive domains (e.g., perceptual or semantic decision tasks). The aim of this work is to both continue an existing line of research and hence to show that the proposed model can also be applied to finer-grained processes within a cognitive domain and to extend it to further domains such as unconscious affective processing. The first two electroencephalography (EEG) studies demonstrate that even on a fine-grained perceptual level (form vs. color) a sensitization of unconscious visuo-motor processing can occur. In the third study, by means of functional magnetic resonance imaging (fMRI), the neuroanatomical correlates of unconscious visuo-motor processing are examined. The fourth experiment tested unconscious affective processing by EEG in order to extend the attentional sensitization model of unconscious cognition to further domains. The results presented in this thesis demonstrate that - in contrast to classical theories of automaticity and attention - unconscious processes can be differentially modulated by higher-level attentional influences and indicate considerable flexibility and adaptability of our cognitive system.