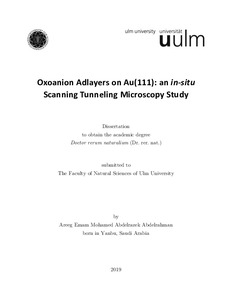 The aim of this work is to investigate the adsorption of formate at a molecular level under electrochemical conditions. Before doing so however, high-resolution in-situ STM images of the well-established Au(111) in 0.1 M H2SO4 system should first be acquired to ensure the possibility of studying a more complicated system. Interestingly, during those measurements, new findings into the potential dependence on the kinetics of surface reconstruction and into the adsorbed sulfate structure were observed. Next, since acetate compared to formate, is not active on the Au(111) surface, the adsorption of acetate will first be studied to help gain more insight on formate adsorption. Both findings will later be compared to one another. Finally, the adsorption of phosphate anions will be investigated as an example of a four-oxygen oxoanion which strongly blocks formic acid oxidation at higher pH values. In the course of phosphate adsorption study, insight into the impact of the coadsorption of additional spectator species like alkali metal cations (K+, Na+, Li+), which are widely used components of supporting electrolytes, will be given. Cyclic voltammetry is preliminarily used to characterize an electrochemical system. With the help of this method, it is possible to acquire information about electrochemical processes and to determine the potentials at which they occur. Cyclic voltammetry and in-situ STM are used to characterize the configuration and bonding of sulfate, phosphate, acetate and formate anions to a Au(111) substrate.