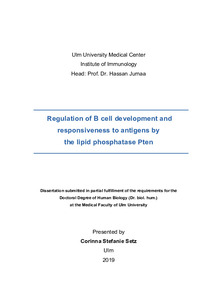 B cell development Blimp-1 Pten autoreactivity clonal deletion differentiation editing proliferation selection B-cell differentiation, FoxO1, Pten, immune response, toleranceIn contrast to other B cell antigen receptor (BCR) classes, the function of IgD BCR on mature B cells remains largely a mystery as mature B cells co-express IgM, which is sufficient for development, survival and activation of B cells. Here, we show that the expression of IgD is regulated by the forkhead box transcription factor FoxO1 and that IgD BCR is selectively responsive to multivalent antigen or immune complexes. FoxO1 is repressed by phosphoinositide 3-kinase (PI3K) signaling, which plays a central role in regulating differentiation, proliferation and survival of B cells. Thus, FoxO1 requires the lipid phosphatase Pten, which acts as a negative regulator of PI3K signaling, for its activation. Hence, Pten-deficient B cells expressing knock-ins for BCR heavy and light chain genes are unable to upregulate IgD. Moreover, we show that in the presence of autoantigen, Pten-deficient B cells cannot remove the autoreactive BCR specificity by secondary light chain gene recombination and are unresponsive to BCR-mediated stimulation. This finding suggests that Pten is dispensable for anergy induction in B cells. Furthermore, we tested the hypothesis that BCR-mediated activation of PI3K induces the terminal differentiation factor Blimp-1 that interferes with proliferation and survival, thereby controlling the expansion of activated B cells. In fact, B cell-specific inactivation of Pten leads to deregulated PI3K activity and elevated Blimp-1 expression. Combined deficiency for Pten and Blimp-1 results in abnormal expansion of B-1 B cells and splenomegaly. Interestingly, Blimp-1 also acts at early stages of B cell development to regulate B cell selection as Blimp-1 deficiency results in an increased proportion of autoreactive B cells. Taken together, our data suggest that the combined requirement of regulated PI3K signaling in addition to Blimp-1-induced terminal differentiation represents the basis for proper selection and expansion of developing B cells. Moreover, in accordance with available data, our results indicate that Pten/FoxO1-mediated activation of IgD expression results in mature B cells that are selectively responsive to antigen complexes.