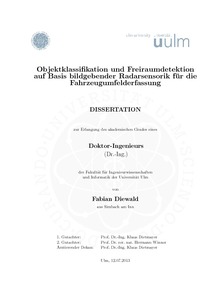 Present and future driver assistance systems are more and more depending on an accurate and reliable environment perception. A common sensor technology used to obtain this information is the automotive radar. For a collision avoidance system, a reaction on stationary obstacles is expected. However, braking on overhead objects, which may be apparently similar to obstacles, must be avoided in any case. Moreover, poor resolution in azimuth leads to inaccurate free space detection with inaccurately estimated obstacle widths. The general aim of this work was to compensate these disadvantages of a radar-based environment perception. At this, a radar multipath propagation based classification of crossing bridges and other overhead objects was developed. The interference pattern caused by the multipath propagation leads to the detection of an oscillating power during an approach to an object. If the object is located high above the road surface, like in the case of crossing bridges or overhead traffic signs, the oscillation is high-frequent. If the distance between an object and the road surface is short (for instance in the case of a car at the end of a traffic jam), the oscillation is low-frequent. An evaluation based on representative scenarios led to a true positive rate of 98 % for stationary obstacles at a false positive rate of 5 %. In addition to the challenging decision about the relevance of stationary obstacles, the azimuthal blur due to the antenna beam width is another limiting factor of radar-based environment perception. As the blur can be modeled by a convolution of the antenna beam pattern with the perceived scene, it was examined how deconvolution algorithms can lead to a more precise environment perception. For example, the Lucy-Richardson algorithm was optimized by considering the noise distribution in radar images. Summing up, the algorithms developed in this thesis tackle the main two drawbacks in a radar-based environment perception.