Technology and characterization of InAlN/GaN FETs 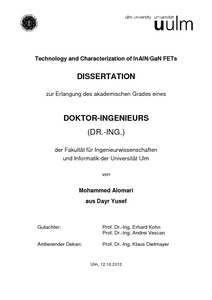 In this work the lattice matched In0.17Al0.83N/GaN heterostructure was investigated using DC, small signal and large signal characteristics of planar HEMTs. The study included heterostructures with variable barrier thicknesses, but still thinner than what is conventionally used in AlGaN/GaN HEMTs. Current densities above 1 A/mm and up to 2.4 A/mm could be achieved in this work and the HEMTs demonstrated high cut-off frequencies up to an ft = 61 GHz and fmax = 112 GHz for 0.1 µm long gates. The oxidation process of the InAlN barrier was investigated by using actual HEMT structures, with the corresponding DC, small signal and large signal analysis. This passivation scheme yielded a lag free device at 4 GHz with output power density of 11.6 W/mm at a drain voltage of 20 Volts. In addition, nanocrystalline diamond overgrowth experiments were conducted for efficient heat extraction from the device, as was evaluated using thermal simulations. The diamond deposition conditions were optimized to yield films with high thermal conductivity reaching 1000 W/mK in the vertical direction of heat flow toward the position where the heat sink would be placed. After establishing the heterostructure stability, a series of experiments progressed toward obtaining a fully diamond coated HEMT by growth experiments on gateless HEMTs and the subsequent optimization of the ohmic contact, and the growth on gateless HEMTs with different passivation and the subsequent optimization of the passivation deposition process, to reach finally a fully processed diamond coated HEMT with 1 µm diamond film thickness. The first diamond overgrown GaN HEMTs operating at frequencies above 1 GHz were demonstrated, keeping a relatively high current density above 1 A/mm. The optimization of this process also enabled continuous operation at very high temperatures above 500 °C and up to 1000 °C, thus reaching with this heterostructure to limits beyond the best achieved with any other semiconductor.