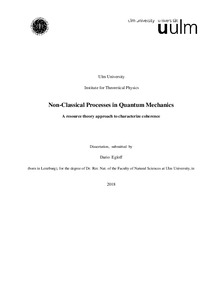 In the works leading to this thesis the aim was to give a clear operational interpretation of different aspects of non-classicality. Doing so, enables to see the different properties as different aspects of the same underlying question, namely whether there is a classical explanation of the measurements at hand. If one incorporates the additional assumptions in the setting (such as locality by the separation of the two parties in entanglement theory), the question of whether some system is classical, boils down to ask whether one can simulate everything one can possibly observe by classical variables governed by a stochastic process. This new perspective allows to characterise dynamic properties of non-classicality, and also to connect them to more static types of non-classicality such as entanglement. Indeed we unify entanglement, discord and coherence from one single perspective. We do this by restricting our setting such that the operations have a clear classical interpretation and hence incorporating natural restrictions of classical systems, if the initial state of the system is not entangled does not have discord or does not have coherence. If the initial state of the system is different, we see the magic of quantum mechanics happening again. For instance we show for one specific quantum algorithm, which is thought to be better than any classical algorithm for its task, that the precision of the algorithm scales with the coherence present at its start. In other words, it is these resources (coherence, discord and entanglement) that make the magic possible and with our perspective we can interpret the role of the different resources and analyse how they are linked to each other. This does not give an explanation of the magic of quantum mechanics, but it does make the mechanisms more transparent allowing for new explanations and there are some examples already in this thesis. Finally we also look at the dual of when states are non-classical, asking, and answering, in a specific setting, what makes measurements non-classical.