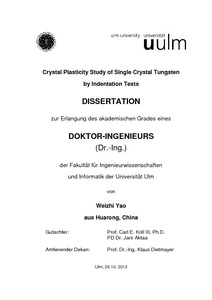 Owing to its favorable material properties, tungsten (W) has been studied as a plasma-facing material in fusion reactors. Experiments on W heating in plasma sources and electron beam facilities have shown an intense micro-crack formation at the heated surface and sub-surface. The cracks go deep inside the irradiated sample, and often large distorted areas caused by local plastic deformation are present around the cracks. To interpret the crack-induced microscopic damage evolution process in W, one needs firstly to understand its plasticity on a single grain level, which is referred to as crystal plasticity. In this thesis, the crystal plasticity of single crystal tungsten (SCW) has been studied by spherical and Berkovich indentation tests and the finite element method with a crystal plasticity model. Appropriate values of the material parameters included in the crystal plasticity model are determined by fitting measured load-displacement curves and pile-up profiles with simulated counterparts for spherical indentation. The numerical simulations reveal excellent agreement with experiment. While the load-displacement curves and the deduced indentation hardness exhibit little sensitivity to the indented plane at small indentation depths, the orientation of slip directions within the crystals governs the development of deformation hillocks at the surface. It is found that several factors like friction, indentation depth, active slip systems, misoriented crystal orientation, misoriented sample surface and azimuthal orientation of the indenter can affect the indentation behavior of SCW. The Berkovich indentation test was also used to study the crystal plasticity of SCW after deuterium irradiation. The critical load (pop-in load) for triggering plastic deformation under the indenter is found to depend on the crystallographic orientation. The pop-in loads decrease dramatically after deuterium plasma irradiation for all three investigated crystallographic planes.