Age-related changes in neural functional connectivity and its behavioral relevance 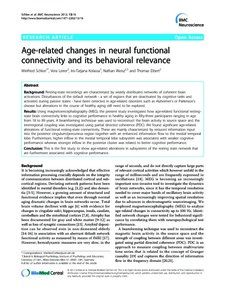 Background: Resting-state recordings are characterized by widely distributed networks of coherent brain activations. Disturbances of the default network - a set of regions that are deactivated by cognitive tasks and activated during passive states - have been detected in age-related disorders such as Alzheimer’s or Parkinson’s disease but alterations in the course of healthy aging still need to be explored. Results: Using magnetoencephalography (MEG), the present study investigated how age-related functional resting-state brain connectivity links to cognitive performance in healthy aging in fifty-three participants ranging in age from 18 to 89 years. A beamforming technique was used to reconstruct the brain activity in source space and the interregional coupling was investigated using partial directed coherence (PDC). We found significant age-related alterations of functional resting-state connectivity. These are mainly characterized by reduced information input into the posterior cingulum/precuneus region together with an enhanced information flow to the medial temporal lobe. Furthermore, higher inflow in the medial temporal lobe subsystem was associated with weaker cognitive performance whereas stronger inflow in the posterior cluster was related to better cognitive performance. Conclusion: This is the first study to show age-related alterations in subsystems of the resting-state network that are furthermore associated with cognitive performance.