Victims of rape show increased cortisol responses to trauma reminders: a study in individuals with war- and torture-related PTSD 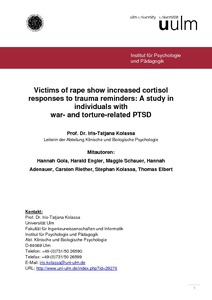 Previous work on the cortisol response to stressors related to previous traumas in PTSD has yielded inconsistent results. We investigated whether the type of the trauma experienced has an effect on cortisol responses to trauma reminders. Raped and non-raped survivors of war and torture with PTSD were confronted with a clinical interview touching on their individual traumatic experiences, and basal plasma as well as saliva cortisol was assessed at three time points. Groups did not differ in baseline cortisol, but cortisol responses to trauma reminders differed between raped and non-raped participants, controlling for traumatic load and PTSD symptom severity: Non-raped participants exhibited a reduction in salivary cortisol, while raped participants showed an increase in salivary cortisol levels during the interview. No effect was found in plasma cortisol. Thus, the type of trauma experienced appears to have an effect on subsequent cortisol dynamics. Wird veröffentlicht in: Psychoneuroendocrinology 37 (2012)