Predicting muscle forces in the human lower limb during locomotion 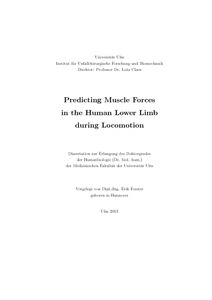 Knowledge of the musculoskeletal loading is essential for the design of orthopaedic implants and surgical procedures. Because muscle forces are hard to measure in vivo, computer models are employed. Inverse dynamics in combination with optimization techniques are commonly used to predict muscle forces. This study presents an extremely efficient and robust approach to compute musculoskeletal loading using inverse dynamics and optimization techniques and thereby predicting synergistic as well as antagonistic muscle activity. Using this approach and a previously developed model of the human lower limb we predicted muscular activities and hip contact forces for four individual subjects during various daily activities. A direct comparison of calculated hip contact forces to measured hip contact forces showed good agreement for walking with various speeds, stair-climbing upwards and downwards. The median of the discrepancies between measured and calculated hip contact forces was always smaller than 0,5 BW (body weight). Using various state-of-the-art optimization criteria we controlled the amount of muscular synergism and found the best agreement of measured and calculated hip contact forces for moderate muscular synergism. Antagonistic muscular activity is also known to occur. So far, antagonistic muscular activity has only been enforced for simple, planar models. For the first time we enforced antagonistic muscular activity for a complex, three-dimensional musculoskeletal model. Moderate muscular synergism accompanied by moderate antagonistic activity improved the agreement between measured and calculated hip contact forces, specifically during stair-climbing and knee-bending. Knee-bending required the largest extent of antagonistic muscle activity. Without antagonistic muscle activity no agreement between measured and calculated hip contact forces could be found during knee-bending. Previous studies assumed that the central nervous system tries to minimize muscular effort. Antagonistic muscle activity that was observed was in contradiction to this assumption. We postulate that apart from minimizing muscular effort ensuring joint stability is another simultaneous goal of the central nervous system. A greater need for stability and coordination could be the reason for the larger antagonistic muscle activity observed during stair-climbing and knee-bending. Calculating muscle forces for living subjects requires many assumptions. We showed that mainly three factors influence the calculated muscle and joint contact forces: first, incorrect input data because of soft tissue displacement during gait analysis; second, the anthropometrical scaling that is used to adapt a general anatomical model to the individual subjects; third, the limitations of the muscle path representation. However, the results indicated that determining muscle forces is principally possible. The software developed in this study is not limited to the musculoskeletal model of the human lower limb, but can also be applied to full body models or models of other species. The aim of building models of animals is to reduce the number of animal experiments.