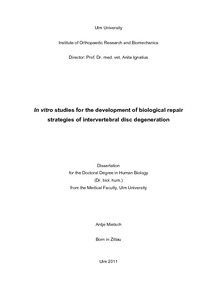 As disc degeneration is often associated with back pain, it has a high clinical relevance. The reasons leading to disc degeneration are as multifactorial as its consequences are variable. The present work addressed two major topics: the understanding of the influence of environmental stress on intervertebral disc cells (part A) and the development of biological repair strategies (part B). In part A, glucose and oxygen concentration as critical nutritional factors were analysed since with proceeding disc degeneration and calcification of the cartilaginous endplates the main route of transport of nutrients is impaired. Glucose deprivation revealed a strong down-regulating impact on gene expression of matrix molecules and an increase in matrix degrading enzymes. Application of hydrostatic pressure did not affect the results. Furthermore, the effect of oxygen adaption to 21 % or 6 % as well as oxygen reduction to 1 % was investigated. Regarding long term adaption, the different oxygen concentrations had only minor influence although some differences existed in the expression of several genes between 6 % and 21 % oxygen. However, the changes observed after transfer to 1 % oxygen were less intense in cells adapted for a long period to 6 % oxygen. Part B focussed on the development of strategies for cell-based therapies in case of disc degeneration. First, influences of medium supplementation with platelet-rich plasma (PRP) and mechanical loading during tissue engineering using human mesenchymal stem cells (MSC) and nucleus pulposus (NP) cells were investigated to clarify if it is possible to induce a disc-like phenotype. For both, MSC and NP cells, human PRP was not able to replace TGF-beta1 with regard to chondrogenic differentiation. The mixture of growth factors in PRP appeared to promote proliferation rather than chondrogenic differentiation. Secondly, an organ culture model was successfully established and can now be used for in vitro testing of cell-based therapy strategies.