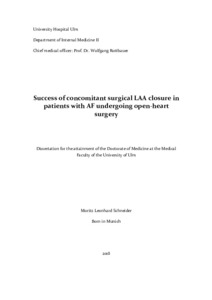 Atrial fibrillation (AF) is the most common form of supraventricular arrhythmia worldwide and associated with an increased risk of stroke. In over 90% of patients with AF that suffer an ischemic event thrombus formation originates from the left atrial appendage (LAA). Therefore, occlusion of the LAA seems to be a reasonable approach for stroke risk reduction. Several methods of surgical LAA closure have been practiced for decades, however, highly varying and mostly poor success rates have been reported. In this investigation, 100 adult patients with a history of AF undergoing open-heart surgery between August of 2013 and April of 2015 were treated with different methods of surgical LAA occlusion and prospectively assigned to receive follow-up by transesophageal echocardiography (TEE) three and twelve months after the procedure. Due to the extremely poor success rate of the primarily exerted suturing techniques during the early follow-up period, device-driven therapy was performed in subsequent procedures whenever possible. No peri-operative adverse events related to LAA closure occurred. The findings of this study strongly confirm inappropriate success rates of surgical LAA occlusion using excluding suturing techniques as previously observed and show excellent results of a device-supported treatment. A direct comparison between the two largest study groups either treated with an external pledgeted purse-string suture or a stapling device that has not been evaluated in this fashion so far revealed the surgical technique to be the only strong predictor of successful LAA occlusion (13.8% versus 95.5% at 3-month follow-up and 13.3% versus 91.7% at 12-month follow-up; p<0.0001). Concomitant surgical LAA closure can be safely performed during open- heart surgery. Excluding suturing techniques should not be implemented any more whereas device-supported treatment provides promising long-term results. TEE or other imaging assessment following LAA occlusion is mandatory and as long as there is no definitive evidence of stroke risk reduction anticoagulation therapy should be continued.