Characterization of apoptosis resistance in human preadipocytes and adipocytes 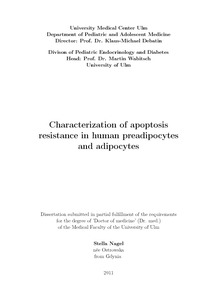 Obesity has reached epidemic proportions in most of the Western world, necessitating new strategies for the treatment of the disorder. The recent finding of a lifelong, high turnover rate of fat cells via apoptosis of "old" cells and differentiation of new adipocytes from progenitor-cells has strengthened the idea of a pharmacological induction of adipocyte apoptosis as a means to regulate adipose tissue mass. In this medical doctorate thesis I have investigated adipocyte apoptosis in the human in vitro model system of Simpson-Golabi-Behmel syndrome fat cells. I was especially interested in changes of apoptosis and insulin sensitivity of the cells in the course of adipogenic differentiation. My data revealed a significant increase in resistance to death receptor-induced apoptosis with adipogenic maturation in parallel to an increased insulin sensitivity of the cells. Molecular studies showed a down-regulation of the death receptor CD95 (Fas receptor) during adipogenesis. This molecule is essential for the activation of the extrinsic pathway of apoptosis as the binding of its ligand initiates programmed cell death. Furthermore, I observed an up-regulation of the protein expression of important anti-apoptotic regulators such as FLIP (FADD-Like Interleukin-1beta Converting Enzyme Inhibitory Protein), Bcl-2 (B-cell lymphoma 2) and Bcl-XL (B-cell lymphoma-extra large) with ongoing adipogenic differentiation. In conclusion, my findings suggest that the increased apoptosis resistance seen in mature adipocytes can be explained, at least partially, by a shift of the ratio of pro- to anti-apoptotic molecules in the cell tipping the balance towards anti-apoptosis. This work sheds new light on the apoptotic process in human fat cells and indicates possible targets for the specific regulation of adipose tissue mass.