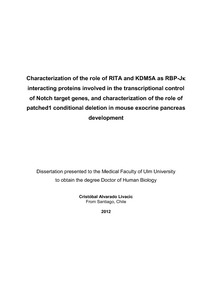 In this study we characterized the role of RITA in the canonical Notch pathway. Here we demonstrated that human, mouse, Xenopus and Tricholplax adhaerens RITA are each a highly conserved RBP-J interacting protein. GST-pulldown assay provided evidence that the BTD domain of RBP-J is essential for RITA/RBP-J interaction. In addition to RBP-J, we showed that in transfected cells RITA colocalizes with ?-tubulin. RITA/alpha-tubulin interaction was confirmed by GST-pulldown, and thus RITA was proposed as a potential scaffold for cytoplasmic RBP-J localization. RITA undergoes a rapid nucleo-cytoplasmic shuttling and is involved in the transport of RBP-J; however, we showed that RITA does not shuttle Notch from the nucleus to alpha-tubulin fibers. Finally, functional assays provide evidence that overexpression of RITA suppresses Notch-mediated transcription. We postulate that RITA represents a novel, negative regulator of Notch signaling. In this study we identified the histone demethylase KDM5A as a novel RBP-J interacting protein. Through GST-pulldown assay, carried out with the D.melanogaster KDM5A homologue Lid and D.melanogaster RBP-J homologue suppressor of hairless (SuH), we showed that KDM5A/RBP-J interaction is highly conserved among species. GST-pulldown assay further demonstrated that the RBP-J domains NTD and BTD are necessary for KDM5A/RBP-J interaction.Finally functional assays showed that KDM5A suppresses Notch-mediated transcription. In summary, this study unveils that histone methylation is dynamically regulated by Notch signaling. In this study we used the mice strain p48_Ptchflox/flox that produced a truncated Ptch1protein in early stages of pancreas development (e9,5). Here we showed by PCR and Southern Blot that a P48-driven cre-mediated Ptch1 deletion resulted in a significant reduction in pancreatic Ptch1wt mRNA levels, which is consistent with the expected Ptch deletion in pancreatic acinar cells. We analyzed the pancreas histology, cell proliferation and apoptosis rates by immunohistochemistry, and we found no differences between knockout and wild type animal. Finally we studied Ptch1 target genes RNA expression, and we found no significant differences among knock out and wild type pancreata. From our data, we postulate that Ptch1 deletion is well compensated in exocrine pancreas development.