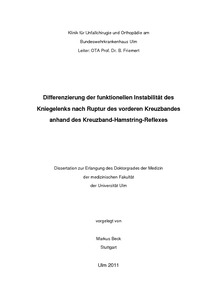 The anterior cruciate ligament (ACL) rupture is a very common injury in the young and active patient. It results in a feeling of instability which can be divided in mechanical und functional instability. The mechanical instability is caused by an increased anterior translation of the tibia whereas the functional instability is the result of a proprioceptive deficit which leads to an altered reflex activity of the hamstring muscles. Some patients reach their former level of activity after ACL rupture; those are referred to as Copers, meanwhile Non-Copers cannot compensate the injury. Former studies revealed hints of a potential differentiation of Copers and Non-Copers via prolonged onset of muscle activity (MLR = Medium Latency Response) after anterior tibial translation in the EMG. In our study we were able to prove that a differentiation between Coper/Non-Coper by EMG analysis is possible. Because of the connatural ranges of both groups we compared the injured vs. the uninjured leg of each single patient in an additional intraindividual analysis approach and could find no difference in the Coper group but a significant difference in the Non-Coper. A further investigation even showed a correlation of the EMG findings with the screening examination used to differentiate between Copers and Non-Copers. In addition we figured out that and how the screening examination could be simplified. Based on our findings it is now possible to receive an accurate impression of a patient’s proprioceptive abilities by simply using two of the four screening tests used in this study (Activities of Daily Living Scale Questionnaire and 6m-timed-hop-test). Since the EMG is a very time consuming and complex examination method it is of great value to have an easy-to-perform test which correlates with the EMG results. These findings can serve as a basis for the decision making which treatment method would be the most promising one for each individual patient.