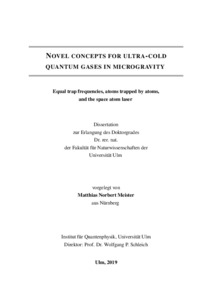 The first realization of Bose-Einstein condensation in 1995 has revolutionized the field of atomic physics and lead to the demonstration of a plethora of new phenomena and applications ever since. Shortly afterwards mixtures of ultra-cold quantum gases have added a new layer of complexity to the systems under study by combining different internal states or atomic species that all interact with each other. During the last years great efforts have been undertaken to create Bose-Einstein condensates in microgravity and to bring them into space to allow for unperturbed, long free evolution times which are extremely beneficial for studying fundamental physical concepts and for performing high-precision measurements. With this thesis we take advantage of these developments and propose novel ideas for multi-species Bose-Einstein condensates that fully exploit the unique conditions of microgravity facilities. In addition to atom-atom interactions, which play a key role for the dynamics in the absence of gravity, we consider multi-color optical trapping schemes and suitable internal-state couplings to tweak the time evolution. With these methods we can generate equal trap frequencies for dual-species mixtures and predict interaction-induced trapping as well as the creation of spherically symmetric atom-laser shells. Our study is based on analytical as well as numerical approaches and paves the way for a future experimental realization of the presented concepts.