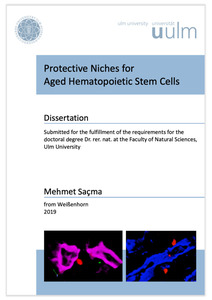 Bone marrow hematopoietic stem cell (HSC) niches are composed of multiple hematopoietic and non-hematopoietic cells interacting with HSCs in a complex 3-dimensional architecture to support HSC function. Upon aging, HSC activity decreases, resulting in impaired tissue homeostasis, reduced engraftment following transplantation and increased susceptibility to diseases and leukemia. However, whether aging affects also the HSC niche impairing its capacity to support HSC function is still largely debated. By taking advantage of long-term in vivo labelling retaining assays and whole-mount immunofluorescence analysis, this work functionally characterizes the aging HSC niche and its interaction with HSCs upon aging. Label retaining HSCs (LR-HSCs) were shown to act as a reserve dormant stem cell population resisting chemotherapeutic challenge. Here, the data show that aged dormant HSCs (LR-HSCs) are functionally and phenotypically younger than non-dormant aged HSCs (nLR-HSCs) and, differently from young HSCs, they are uniquely found only at perisinusoidal niches. Additionally, upon aging HSCs are located more distant to multiple types of bone marrow cells but not from sinusoids and perisinusoidal Nes-GFPlow cells. Furthermore, the results demonstrate that the aged sinusoidal niche is structurally and functionally preserved, while the endosteal/arteriolar niche is not only structurally but also functionally disadvantaged in the aged mouse. Moreover, Jag2 is expressed at sinusoids and perisinusoidal Nes-GFPlow cells in proximity to aged LR-HSCs with active Notch signaling and preserves quiescence of aged HSCs at sinusoids in vivo. Finally, myeloablative chemotherapy disrupts the function of aged sinusoidal niches long-term, which is linked to the lack of recovery of endothelial Jag2 at sinusoids after chemotherapy and results in hematopoietic failure and decreased survival of aged mice. Overall, the data characterize the functional alterations of the aged HSC niche and unveil that perisinusoidal niches are uniquely structurally and functionally preserved and protect HSCs, located in their proximity, from aging. These findings underline that physiological alterations of the HSC bone marrow niche upon aging impact on hematopoiesis and survival particularly in the context of specific (chemo-)therapeutic interventions.