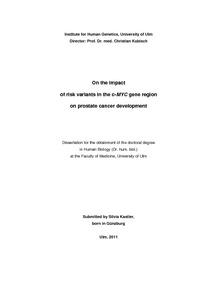 Several single nucleotide polymorphisms (SNPs) in the chromosomal region 8q24.21 are associated with a higher risk for prostate cancer development. The identification of functional variants and the mechanism causing the disease is still under progress and was aim of this work. The only sequence with coding capacity in this genomic region corresponds to a pseudogene of the stem cell marker OCT4 which is discussed to be involved in carcinogenesis. This pseudogene POU5F1P1 shows a high homology to its parent gene and might be involved in prostate cancer development. Studies of this work should determine if variants on 8q24.21 might influence the expression level of this pseudogene or if coding variants in POU5F1P1 might represent functional risk variants. Real-time RT-PCR showed an overexpression of POU5F1P1 in prostatic carcinoma tissue compared to surrounding tissue. 5’RACE experiments identified nine different POU5F1P1 promoters scattered over a genomic region of 860 kb. But none of them was affected by known risk variants and statistical analysis could not show correlation of corresponding SNP genotypes with the observed POU5F1P1 expression levels. Five SNPs in the open reading frame of POU5F1P1 served for an association study performed with prostate cancer patients and unaffected controls. SNPs in POU5F1P1 showed similar association with prostate cancer as already known risk variants on 8q24.21. The POU5F1P1 haplotype which is most similar to the OCT4 gene sequence was shown to be linked with two already known risk variants and thus might represent a functional unit. But immunohistochemistry and Western Blot experiments did not show convincing data for the presence of a POU5F1P1 encoded protein in prostatic tissue. Thus, POU5F1P1 most probably does not play a role in prostate cancer development. In conclusion, other targets of 8q24.21 prostate cancer risk variants have to be considered that contribute to prostate cancer development.