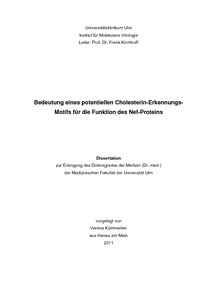 The accessory protein Nef plays an important role in HIV 1 infectivity and pathogenicity. Several Nef variants contain a consensus C-terminal cholesterol recognition motif (CRM). Nef-mediated increase of cholesterol synthesis and transport to lipid rafts and viral particles has been reported to be responsible for increased HIV infectivity. Therefore binding of cholesterol to the CRM has been assumed as the underlying mechanism. However this research was limited to the NL4-3 Nef variant. Moreover in SIVcpz Nef proteins the CRM is completely absent, still these variants increase infectivity. The aim of this study was to examine if the CRM indeed is essential for the Nef-mediated increase of infectivity and whether altering the CRM affects other Nef functions. Using site-specific mutagenesis the CRM has been destroyed in three HIV Nef variants and inserted vice versa in two SIVcpz Nef variants. Functional analysis of these mutated variants revealed an important role of the C-terminal region in the increase of infectivity, independent of a functional CRM. Furthermore the results indicate various effects of CRM alterations on other Nef functions, e.g. upregulation of cholesterol synthesis and surface receptor modulation. Thus not the CRM-cholesterol interaction, but other C-terminal interactions are apparently responsible for these Nef functions and further research on the C-terminal region has to be conducted.