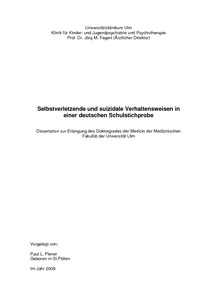 Background: International studies report high prevalence rates of Non-Suicidal Self-Injury (NSSI) and suicidal behavior among adolescents. So far, no data about the prevalence and functions of NSSI have been available from a German adolescent community sample. Method: Lifetime prevalence rates of NSSI and suicidal behavior were assessed by using standardized, anonymous measures in an adolescent school population. Rates were compared to a matched sample of US adolescents using the same instruments. Results: Out of 665 students (mean age: 14.8 years) that participated in the study, nearly 26 % reported injuring themselves in the past at least once. Nearly 6.5 % reported a history of suicide attempt. No significant difference in rates of NSSI and suicidal behavior was found between the German and the US population. Discussion: This study adds to the growing body of literature on adolescent NSSI. Self-Injury is a common phenomen in German adolescents with comparable rates to other countries.