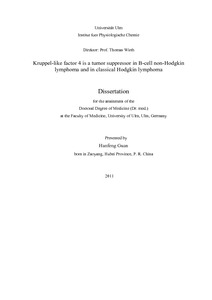 B-cell lymphoma is the most common form of hematological malignancies in the western world. Significant progress has been made over the past two decades concerning our understanding of B-cell lymphomas pathogenesis; nevertheless, further efforts are needed to elucidate the transforming events and identify the therapeutic targets. The transcription factor Kruppel-like factor 4 (KLF4) may act both as an oncogene and a tumor suppressor in a context-dependent manner. We found that the KLF4 promoter is often methylated in B-cell lymphoma cell lines and in primary cases of B-cell lymphomas. Promoter CpG island hypermethylation has been established as one of the key mechanisms that silence tumor suppressor genes and promote tumorigenesis. In the present study, the hypermethylation of KLF4 promoter was found to be associated with absence of its expression. Conditional over-expression of KLF4 in two BL cell lines moderately retarded their growth, mainly due to cell cycle arrest in the G0/G1 phase. In the cHL cell lines KM-H2 and L428 KLF4 expression induced massive cell death. Using a quantitative RT-PCR (Q-PCR) gene expression array we identified KLF4 target genes including the proapoptotic gene BAK1, activation level of which was much higher than that of other regulators of apoptosis. We further investigated role of BAK1 in KLF4-induced apoptosis in cHL cells. Using a shRNA-mediated knock-down approach we found that pro-apoptotic protein BAK1 is largely responsible for KLF4-induced cell death. Moreover, we found that KLF4 down-regulates musculin (MSC) / activated B-cell factor-1 (ABF-1) in cHL cell lines. Of note, aberrant expression of ABF-1 is proposed to be responsible for the unique loss of B-cell phenotype of cHL. We conclude that epigenetic silencing of KLF4 in B-cell lymphomas and particularly in cHL may play important role in lymphomagenesis and favor lymphoma survival by loosening cell cycle control and protecting from apoptosis.