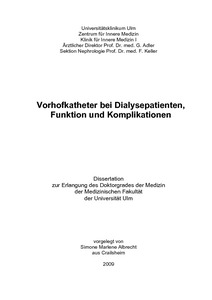 Comparison between single-lumen and double-lumen tunneled dialysis catheters: Background: An autologous fistula, the first choice vascular access, cannot be created in all dialysis patients. Tunneled catheters are more and more frequently used as an alternative vascular access for long-term hemodialysis. Patients & Methods: We retrospectively analyzed our experience with all tunneled catheters placed between 1999 and 2005 in our center. A comparison was made between single-lumen and double-lumen catheters by Kaplan-Meier analysis. A total of 77 catheters were implanted to 61 patients (32 males, 29 females). The median age of patients was 71 years (range 21 - 91 y). Diabetes was the leading cause of renal failure (31 %) and a malignant co-morbidity was frequent (16 %). Results: More single-lumen catheters were inserted (n = 55) than double- lumen catheters (n = 22). The majority of catheters (90 %) were implanted by nephrologists. Most catheter placement procedures were without complications (80 %) except 1 serious and fatal V cava perforation. Flow problems due to clotting were the most frequent long-term complication that was managed by local alteplase thrombolysis (2 - 4 mg iv). Also infection was frequent and managed by antibiotic treatment. Staphylococcus aureus bacteremia included MRSA required the removal of the catheter (n = 8). Dialysis efficiency was within the quality standards in both groups. In the Kaplan-Meier analysis the median time of catheter function was 479 days (15.7 months) for the single-lumen catheters that was longer but not significantly so as compared to 427 days (14.6 months) for the double-lumen catheters. Conclusion: 1. Tunneled dialysis catheters pose a valuable vascular access option for hemodialysis. 2. There is a trend for better performance of single-lumen as compared to double-lumen catheters.