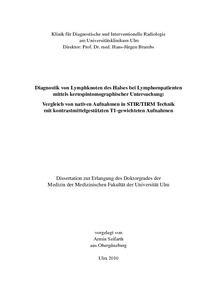 MRI-Staging protocols of cervical lymphoma usually contain contrast enhanced sequences. The following study evaluates if the administration of contrast media is beneficial compared to native sequences alone. Material and Methods: 51 cases of patients with cervical Lymphoma were retrospectively reviewed by 2 radiologists, blinded to clinical information. Coronal STIR (short tau inversion recovery) images and contrast enhanced coronal T1 fat saturated sequence (T1 Gd) images were evaluated regarding image quality as well as the appearance of lymphnodes (size, number and quality of contrast to surrounding tissue) which was stated for 3 sectors of the neck. The readers judgement of whether the appearance of each case was pathologic or not was compared to the gold standard which was the clinicians judgement of each case at the time of the MRI examination. Results: The image quality of STIR sequence images was rated by the two radiologists as good in 88 / 94% of cases, T1 Gd respectively in 51 / 67%. The contrast of lymphnodes to surrounding tissue in STIR was better when compared to T1 Gd in 61 / 55% while vice versa T1 Gd was superior in 8 / 7%. This had direct influence on the possibility to detect lymphnodes with 21 / 24% of sectors with detected lymphnodes in STIR and missing appearance in T1 Gd; the administration of contrast media in T1 Gd was beneficial in 3 / 3% when compared to STIR. Compared to the gold standard the sensitivity of STIR was 83 / 86%, specificity was 82% for each reader. Sensitivity of T1 Gd was 72% for each reader with specificity of 95%. Conclusion: While the STIR method was producing images of better quality and allowed a higher sensitivity when compared to T1 Gd, STIR was false positive more often. In clinical routine however, specificity would be enhanced by comparison to previous examinations. For primary staging T1 Gd sequences should be used. In consecutive staging protocols the administration of contrast media is however not beneficial.