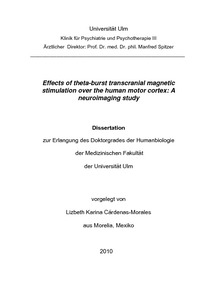 Theta-burst stimulation (TBS) is a novel protocol of subthreshold repetitive transcranial magnetic stimulation (rTMS) inducing inhibitory or facilitatory effects in cortical excitability. So far, effects of TBS on motor cortex excitability have mainly been characterized by electrophysiological measurements of motor output. From functional imaging studies with conventional subthreshold rTMS protocols it remains unclear whether only remote or directly stimulated brain areas are modulated, and what type of modulation occurs (direction and dependency to neural activity. The main aim of the present study was to explore the after-effects of an excitatory TBS protocol called intermittent TBS (iTBS) over left M1 on neuronal activity and regional cerebral blood flow (rCBF). In a within-subjects (17 healthy participants) repeated measurement design with control session we examined activation pattern in a choice reaction task with the two index fingers after application of iTBS. Intensity of iTBS was set to 90% of active motor threshold over the left motor cortex (M1). Neuronal activity was monitored by five consecutive event-related BOLD-signal fMRI scans during a choice reaction time task. Furthermore, rCBF at rest using MR-based perfusion imaging was interleaved with BOLD signal measurement. The complete scan lasted for one hour. For purpose of control the same protocol was measured in absence of iTBS on a separate day. In a third session, compound muscle action potentials (cMAPs) amplitude of the right hand at rest evoked by single pulse TMS was measured after iTBS for one hour. Compared to control session a significant decrease in BOLD-signal due to right hand motor activity during the choice reaction task was observed mainly in the stimulated M1 and motor related remote areas after stimulation. By contrast left hand motor responses after iTBS yielded a tendency to increase BOLD signal. CMAPs amplitude increased up to 42 minutes and reaction times during the motor task were accelerated. No changes in rCBF were detected. The data demonstrate that subthreshold iTBS targets both the stimulated region and remote areas. The BOLD-signal decrease seems to represent a facilitating effect, reflecting reduced metabolic demand to generate efficient motor responses similar to changes observed in short-term motor learning. This facilitation was confirmed by cMAPs amplitude increase and reduced reaction times during the motor task. On the other hand, the increase observed during the left hand motor responses may indicate inhibition of the network and thus, more effort to generate adequate responses. The absence of rCBF changes at rest indicates a quite specific network modulation. The combination of TBS with neuroimaging appears as a useful approach to monitor treatment effects for example in the rehabilitation of cortical motor deficits following brain strokes.