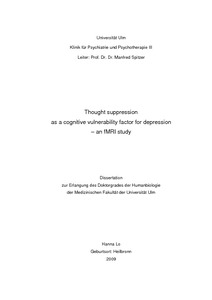 A negative cognitive bias in information processing is seen as a vulnerability factor for the development of depression. The Scrambled Sentences Task (SST) has been proven to be an appropriate implicit test to measure the negative bias in information processing also in remitted Major depressed individuals. Normally, a cognitive negative bias cannot be seen in remitted depressed people (a high-risk group) when processing emotional ambiguous material in the SST. Only when put under mental load, the remitted depressed subjects show a negative cognitive bias. The ironic process theory of thought suppression explains these results with the disruption of the effortful suppression of negative thoughts in remitted depressed. This process of mental control would be disturbed by the additional cognitive load task. One aim of the present study was to answer the question whether people at only mild depression risk (who suffered a Minor Depressive episode (MDE) in lifetime) also show a negative cognitive bias in their information processing or not. Another aim was to investigate the neural correlates (fMRI) that are associated with the processing of emotional ambiguous material in the SST. The results suggest that even people at mild depression risk show an increase of negative sentences when under mental load. However, this increase was not as expected associated with habitual thought suppression. When processing emotional ambiguous material, the fMRI data showed an increase in vACC and putamen activity, possibly indicating an involvement of higher stress and negative emotions. Unscrambling negative sentences was accompanied by activations in TPJ, OFC and insula that might reflect a greater effort for attentional orienting and controlling emotional responses. An MDE in lifetime was associated to higher activation in the right VLPFC when processing emotional ambiguous material. Previous research discussed a dysregulated VLPFC as a vulnerability marker for depression and anxiety.