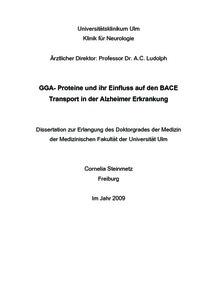 Beta-site of APP-cleaving enzyme (BACE) is known to cleave the amyloid precursor protein (APP) followed by Gamma-secretase resulting in Abeta accumulation in extracellular senile plaques which are the hallmark of Alzheimer´s disease. APP and BACE traffic together. GGA1, a member of the Golgi-localized gamma-ear-containing ARF binding (GGA) protein family interacts with BACE phosphorylation dependent via its VHS domain in the Golgi. We intended to show whether the other isoforms of the GGA protein family, GGA2 and GGA3, colocalize and interact with BACE as well. We utilized confocal laserscanning microscopy to reveal colocalisation of BACE and the GGAs. To strengthen those results, we applied a novel technique to show close protein-protein vicinity in living cells with fluorescence protein tags: spectral fluorescence lifetime imaging microscopy (SLIM). With this technique a distance of less than 10 nm between two chromophores, which indicates an interaction, results in a decreased donor lifetime. We detected colocalization of GGA1, GGA2 and GGA3 with BACE1 at perinuclear compartments. The colocalization of GGA2 and BACE was enhanced in endosomal as well as Golgi structures whereas the colocalizations of GGA3 and BACE1 were smaller and could only be shown at the ER or Golgi. Using SLIM measurements we found a clear decrease in donor lifetime indicating interaction between all three GGAs and BACE. By performing control experiments with deletion mutants of GGAs and BACE we were able to show that the VHS domain of the GGA proteins and the DXXLL-motive in the BACE protein are the clear link between these proteins since colocalisation could still be shown while an interaction was missing. Conclusion: These results indicate that all three GGA isoforms may have differential impact upon the transport of BACE and may therefore play an essential role in APP cleavage and the subsequent Abeta generation.